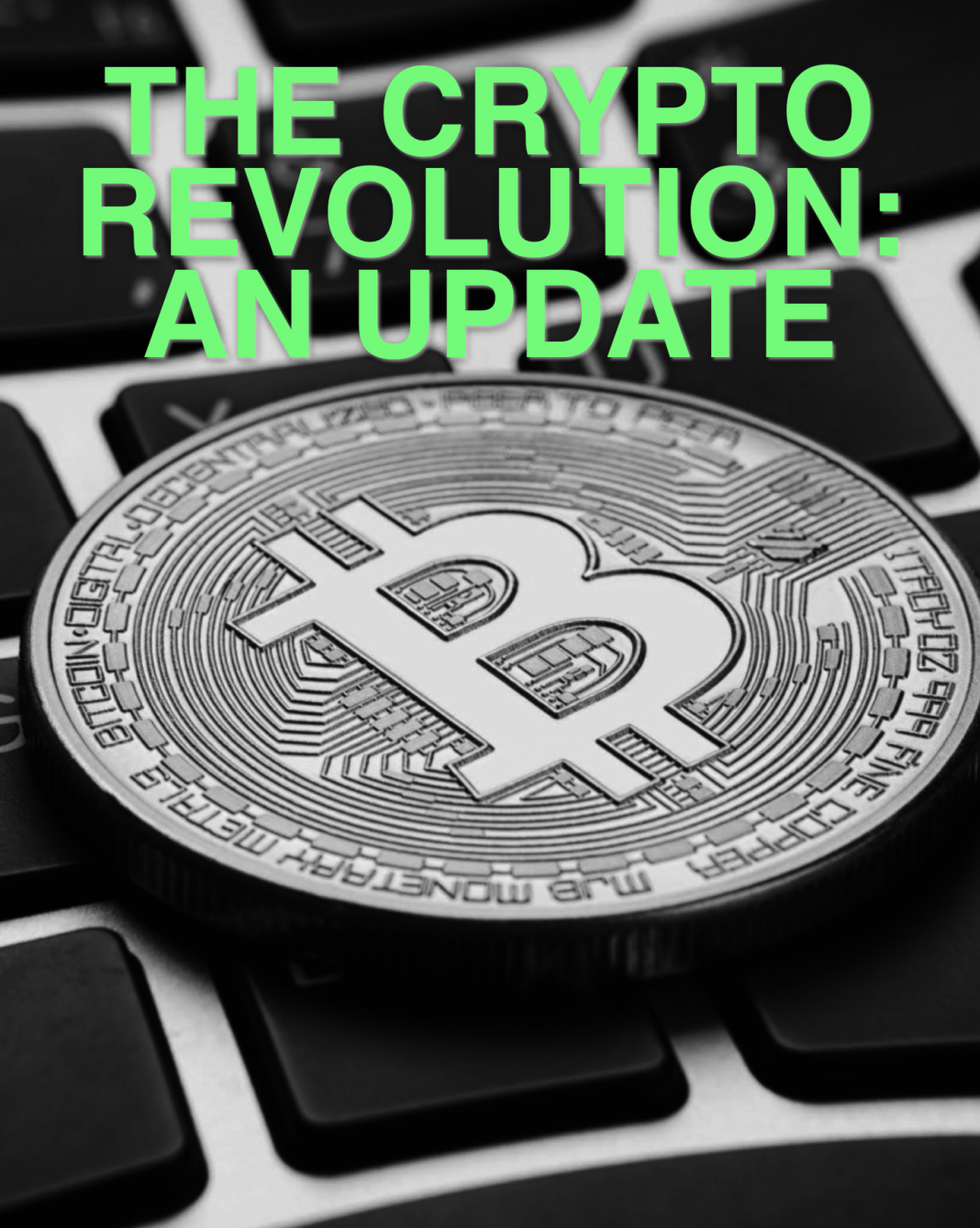 If one were to paint a Mosaic of the investment world over the last 100 years or so, it would portray a landscape that has remained essentially unchanged.

The ebbs and flows of the various investment sectors rise and fall in a financial roller coaster of affluence and depression, driven in large part by central banks that pretend to “manage” the economies of their respective nation-states but are really following the dictates of international bankers that manipulate those markets.

There has been no shortage of things in which to invest but the broad range of choices have remained pretty constant.

Investors had no particular reason to expect a disruptive element to this playing field.

All of that changed in 2009 when an enigmatic individual or entity named Satoshi Nakamoto created and introduced to the world Bitcoin, and Blockchain, the horse that it rode in on. (Nobody knows who or what Satoshi Nakamoto is, or if they do, they aren’t saying. There have long been rumors that the U.S. cyber spy agency, the NSA, created Satoshi and thus Bitcoin. I put nothing past these digital spooks, but this remains little more than speculation. I use the term “little more” advisedly as the NSA published a white paper on e-cash in 1996).

Bitcoin was not originally created or intended as a new investment medium. It was created as a peer to peer (computer to computer) digital currency. A currency that uses cryptography to secure financial transactions and that is free from the intrusive surveillance, regulation, and interference of governments and banks.

But today, only about 1/3rd of the estimated 25 million Bitcoin owners use the currency as a means of payment, while 2/3rds are holding Bitcoin for potential capital gains. In other words, it is primarily used as an investment and is the “new kid” on the investment block.

In their first decade, Bitcoin and Blockchain have established themselves as functioning parts of the global financial and business landscape. They are here to stay. And while we have covered the cryptocurrency world in earlier issues of The Hard Truth, as the digital currency world celebrates its 10th anniversary, it seemed appropriate to revisit the world of cryptocurrencies and the underlying platform that enables them to function – Blockchain.

Bitcoin was the first cryptocurrency (and the only crypto for the first two years of its existence – 2009 to 2011) and is the digital currency “brand” that most people know. Many think it is the only digital currency. But that is far from the case today.

There are currently over 2,000 digital currencies. They have a combined market capitalization (the amount of money invested) of $138 billion dollars, with more than $20 billion dollars of cryptocurrencies traded every day.

Cryptocurrencies are anything but dead. While the prices have been depressed, as you can see, there is no shortage of trading volume that is, as we have said, running in excess of $20 billion per day.

Here’s a look at the statistics of the top 10 cryptocurrencies.

You can see that with Bitcoin’s market cap of $70 billion, it represents a little over 50% of the total cryptocurrency market of $138 billion. As you can also see, even the #10 crypto has a market cap of $1.5 billion.

It is also evident that, in addition to Bitcoin, #2, Ethereum, and #3, Ripple stands head and shoulders above the rest. Both of these two crypto brands represent innovative global communication platforms – they aren’t just currencies, but currencies representing digital solutions that are in high demand.

If you are not a crypto investor and are considering doing so, I would recommend investing in one or more of these top three. Ripple, in particular, provides a fascinating service to some of the largest banks in the world, enabling them to transfer currencies around the planet at light speed.

There are plenty to choose from. And some are unique and offer strong prospects for appreciation. But if you are going to wander off of the farm, be sure you do your due diligence.

While each of the currencies is “their own person”, the value of the various cryptocurrencies follow Bitcoin. In other words, with few exceptions, as Bitcoin goes up or down, so go most of the others.

With that in mind, the graph below shows the price of Bitcoin over the last six months.

There is good news and bad news in this graph. The bad news is that, as you can see, the price of Bitcoin has been running around $4,000 for the last 6 months. This when Bitcoin’s price was as high as $19,535 in December 2017

The good news is that the graph of the last 6 months clearly shows that Bitcoin is being accumulated by insiders. Someone is holding that graph down. And they are holding it down so other investors will get tired of waiting for it to go up and will sell.

And these insiders will buy. And at some point, they will move the price up, likely way up.

When do you ask?

I don’t know. Likely sooner rather than later, but they could hold the price down for months, maybe even years. I tend to think that it will break to the upside later this year. But that is an educated guess, not a certainty.

What isn’t a guess is that Bitcoin is under accumulation and will move strongly to the upside at some point in the future. It won’t stay where it is indefinitely.

To give you a sense of the growth of cryptocurrencies globally, the following are two examples taken from the crypto newsletter, Coindesk Weekly. https://www.coindesk.com

The first deals with the creation of a prepaid Visa debit card that allows the holder to spend in Euros or any of 7 cryptocurrencies, the second is about a new service that pays interest on cryptocurrency deposits.

“SPEND, NOT HODL (Hodl is a slang term and Internet meme that is used in the Bitcoin community when referring to holding the cryptocurrency rather than selling it.Wikipedia)

“Banking startup 2gether plans to launch a prepaid Visa debit card that allows users to spend either euros or any of seven cryptocurrencies across the 19 eurozone nations. Cardholders can use the firm’s iOS and Android app to buy, sell and manage bitcoin (BTC), ether (ETH), XRP, bitcoin cash (BCH), EOS, Stellar (XLM) and litecoin (LTC) holdings. The Visa card will immediately convert these holdings into fiat when users try to spend their funds. And unlike other card services, 2gether says it won’t charge any fees.

If you want to invest in a cryptocurrency, even stick your toe in the water, you need an account to buy and or sell crypto. There are numerous cryptocurrency exchanges where you can open such an account.

“Crypto lender BlockFi launched an interest-bearing crypto deposit account earlier this month – and the product is fast gaining traction. According to CEO and founder Zac Prince, users have already deposited more than $35 million in cryptocurrency, with $25 million coming after the March 5 launch. The product entices investors with returns of up to 6.2 percent annually for holding their bitcoin or ether.

However, the accounts may be too popular: BlockFi will only provide a 2 percent return to clients with more than 25 bitcoin or 500 ether in their accounts, saying the demand from institutional clients was higher than expected and more than the company can actually support. This change will kick in on April 1.”

It’s very similar to having a stock brokerage account, but the crypto exchanges don’t provide currency account executives to handle your orders. You do it yourself. Crypto exchanges have gotten much more service-oriented in the last year, and in most cases, one can follow the instructions and get an account set up easily. Once the account is set up, you put some money in it, and then you can buy and sell.

Caution: most cryptocurrency exchanges only trade a few currencies, so be sure you know what currencies your exchange trades in and that they permit buying and selling the currency you want to buy.

This site at the following URL lists the top exchanges in the U.S. and abroad with the pros and cons of each exchange. There is a lot of data on each of the following exchanges here: https://blockgeeks.com/guides/best-cryptocurrency-exchanges/

Not only are cryptocurrencies here to stay, but Blockchain, the technology that has enabled them to be flashed across cyberspace from one person to another, has expanded outside of its role in the currency world and is now in use by banks and commercial enterprises worldwide for a multitude of purposes. Blockchain facilitates near-instant, secure, document-based business transactions seemingly turning the planet into a cyber market place best suited to inter-planetary commerce.

The growing use of Blockchain in commerce is truly explosive.

Here is a further definition of Blockchain and some examples of its use.

“Blockchain is distributed, decentralized, and peer-to-peer… Every transaction is immutable, meaning it cannot be reversed or tampered with. Transactions are near- immediate… and will always be recorded on the blockchain, but the identities of senders and receivers are virtually masked (with fundamental security practices).

“Simply put, this technology allows two parties to partake in secure digital transactions without a third party. A blockchain is a ledger that will record these transactions in a completely encrypted fashion, so as to protect participants from cybercriminals.

“When a transaction is recorded in the blockchain’s publicly shared ledger, it is theoretically tamper-proof.

“A transaction can also be recorded quicker than ever before because there is no third party needed to verify it. The transactions are interdependent… (and prevent) fraudulent requests from altering the blockchain or completing its process.

“Taking out the middleman in this process can save businesses money as well.

“Now, let’s get into some of the most common applications of blockchain today.

“Blockchain can be used in a number of different kinds of transactions, the most common of which is Bitcoin…

“One of the most important things about blockchain is the encryption it offers for digital transactions.

“An industry like healthcare, which requires extreme privacy with its records, can greatly benefit from this added level of security. Blockchain would help to verify prescriptions and the supply management of pharmaceuticals.

“Blockchain can completely change our understanding of voting. Integrating blockchain into our voting process means that we’d be hearing a lot less about voter fraud accusations. Here’s how.

“When a vote is recorded in the blockchain, it cannot be deleted or changed without evidence of tampering. Each of these entries would have its own unique lock and key attached to it, which

could be used to authenticate a voter’s identity. That means that foul play would be virtually impossible.

“With the introduction of music streaming, ownership rights and royalty distribution have become prominent issues in the music industry. Blockchain can help to create a thorough and accurate decentralized database of music rights.

“This ledger would provide transparent transmission of artist royalties. Musicians would be paid with digital currency according to the specified terms of the contract.”

Blockchain technology is so useful to various types of business transactions that major companies like IBM are now specializing in helping companies utilize the technology.

And as if Amazon hadn’t expanded into enough markets, they too are offering to help companies to utilize Blockchain technology.

Blockchain and cryptocurrencies have changed both the investment landscape and the way business communications operate, and they will be with us going forward in the 21st century.

This article was to give you an overview of the key dynamics of these changing worlds. I hope you can use the information to enhance your survival and those you know and love.

2 Replies to “THE CRYPTO REVOLUTION: AN UPDATE”