Fortune tellers have a good opportunity to choose from a short menu of life’s problems and desires and land on something the person is concerned about.

If it isn’t love, it’s money and visa versa.

Predicting the financial markets in the midst of an economic crisis (which, media spin and the DJIA* aside, is still with us) is less forgiving and is somewhat akin to walking a metaphorical tightrope without a net. A misstep could cause you to fall and break your reputation, which, truth be told, can be picked up and dusted off and put back in the game.

But too many falls and your audience quits coming to your show.

I don’t have a show, beyond a book to read, and being a financial prophet is best left to Warren Buffet and friends. But modesty aside, I have been encouraging the ownership of silver since it was $4 per oz and it is now battering at the door of $30 per (with, in my opinion, a lot more upside).

And while the success story is not yet as dramatic, I make clear in Crisis by Design that deploying one’s assets should include a modest diversification out of dollars and into the Chinese Yuan (AKA the Renminbi or RMB for short). 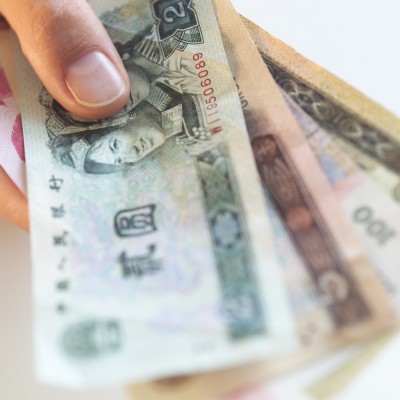 No surprise then that the Chinese government has just announced that it is permitting Yuan deposits at the state owned Bank of China for U.S customers. There are branches in New York and Los Angeles currently.

The Yuan has already started a modest appreciation against the dollar, but with the U.S. government continuing its annual party of trillion dollar budget deficits (this year’s is projected to be $1.5 trillion!) the dollar will likely see continued erosion on world currency markets. The other side of the coin is the fact that the Chinese economy grew about 10% last year and China contributed a staggering 50% of the planet’s economic growth in 2009.

China’s opening the gates to the relatively free trading of the RMB signals a paradigm shift in the global economy and, in our opinion, argues strongly for further appreciation of that nation’s currency.

All said, bear in mind the old adage and SEC mandated admonition, past performance is no indication of future results.

It is also important that you understand that buying a foreign currency is buying a commodity: the value can go up or down depending on currency markets, meaning there is risk involved.

Be well and Keep your powder dry.