Having a broad spectrum of banks and financial institutions under one umbrella, our vision is to make expert financial advice, customized solutions and services readily available to all in the most cost-effective way possible. A few years hence we aim to expand our services PAN India and help everyone, be it businessmen, working professionals, homeowners, or SMEs, in achieving their life-long financial and investment goals. With Finkart’s uncompromising integrity and an individualized analysis for each client, we wish to bring the best-suited financial solutions to the table.

Finkart is all about providing the best-suited financial advice and wealth management solutions tailored to our clients’ unique professional and personal needs. We believe in keeping our customers first, and helping them make the smart investment and financial decisions backed with our innovative, effective approach. At Finkart, our sole mantra is to build long-term professional relationships with our customers & offer value-added financial counseling that helps! Moreover, our mission is to keep your sensitive data safe with us as we have the best ex-bankers and financial experts on board who take security seriously.

Our entire team of professionals strives to work hard each day so they can make our customers happy and satisfied by the end of the day. The fundamental values that form the core framework of our company incorporate: Cost-Effectiveness
Promptness
Efficiency
Integrity
Confidentiality
Innovation &
Teamwork
John Truman Wolfe is a best-selling author, former banker, political activist and humanitarian. He is a global financial advisor to governments across the world, a former senior credit officer for two California banks, and the co-founder of the prestigious Los Angeles-based business management firm Wiseman & Burke, Inc.
He is also the host of the John Truman Wolfe Financial Hour on CRN Talk, a comprehensive weekly radio show covering everything from stocks to precious metals and even cryptocurrencies. With scores of renowned guests from the worlds of finance, politics, economics, and more, tuning in is always time well spent.
He is also the author of the internationally acclaimed Tom McKenna private eye series. His first Tom McKenna novel, Mind Games, was the winner of the Independent Newspapers Golden Plume Award for Fiction. His second book, The Gift, takes McKenna into the dark underbelly of Washington, D.C. lobbying and a secret agenda that had its beginnings in the final days of the Third Reich.
His previous release–Crisis By Design: The Untold Story of the Global Financial Coup and What You Can Do About It, exposing the real forces behind global financial crisis, has become an Amazon Best Seller.
Now, Wolfe takes us deeper behind the wizard’s curtain again to examine the UPCOMING FINANCIAL CRISIS, his updated edition of Crisis by Design that includes the very latest insider information on the banking crisis in Cyprus and Greece and how it will eventually hit the shores of America. As alarming as the news may be, Wolfe also gives the reader plenty of solid how-to information to safeguard themselves and their family when it hits.
Wolfe personally uncovered the criminal background of one of the most clever con men of all time. He has worked with federal law enforcement agencies, and through them, intelligence services of foreign governments.
He lives in Los Angeles with his family. 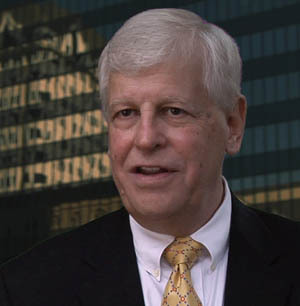 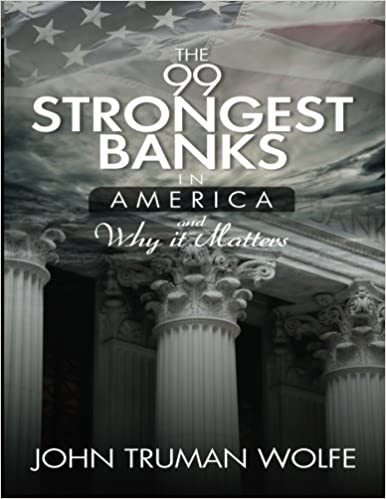 The 99 Strongest Banks in America

Banking—in the U.S. and globally—has devolved into a colossal Vegas-like casino and bankers have become the ultimate “whale” gamblers. The global banking system today has an estimated $1.2 quadrillion dollars in a kind of monetary heroin called derivatives.* The figure is mind-numbing, but just to give you a sense of the size of this madness, here it is with the appropriate number of zeroes (15): $1,200,000,000,000,000. Or, it may be more entertaining if you think of it this way: If you had a job that paid you $1,000 per second, it would take more than 31 years for you to earn $1 trillion. A quadrillion is 1,000 trillion. It’s a big number. And I repeat, there are now $1.2 quadrillion dollars in derivatives held by financial institutions in the U.S. and abroad. 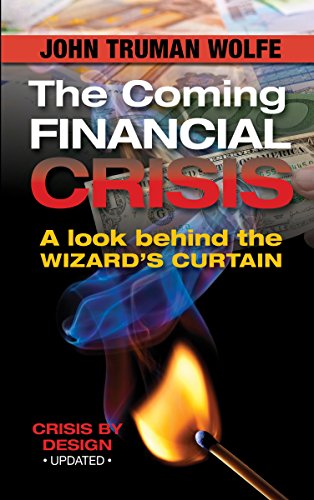 The Coming Financial Crisis: A Look Behind the Wizard's Curtain

Is there really a Global Financial Ruler? One that dictates policy to the Central Banks of the world? Is there a Central Bank of central banks, that is senior to the U.S. Federal Reserve Bank, the Bank of England and the other national banks that control interest rates, inflation, deflation, prosperity and depression? Such a bank not only exists, but John Truman Wolfe exposed this heretofore unseen hand in the Global Financial Crisis of 2008 and their plans for the next one. No "conspiracy theorist" Wolfe names names, dates, places and actions. If you have ever wanted to know who's behind the Wizard's curtain of international finance and how to protect yourself, start at page one. And make no mistake, the events of 2007 and 2008 were a prelude: The next crisis, Wolfe predicts, will take the "bail-ins" used in the economic meltdowns in Cyprus and Greece and apply them worldwide, leaving depositors and consumers holding the bag, yet again. 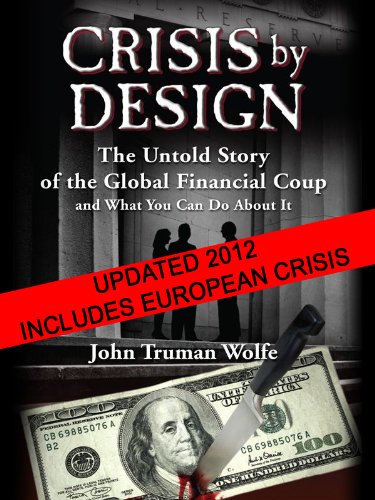 Crisis by Design: The Untold Story of the Global Financial Coup and What You Can Do About It

Is the international financial crises a carefully orchestrated strategy to gain control of the world’s finances? What if the financial crisis that slammed the US and is now rolling through Europe was not caused by unforeseen random events, but was instead a carefully orchestrated assault designed to cripple both the US and European economies and ultimately gain complete control of the world’s financial markets? Sound far fetched? Then you need to read the facts contained in Crisis by Design. This book is not some paranoid conspiracy theory, claiming the sky is falling. Written by a former banker, Crisis by Design pulls back the wizard’s curtain, to reveal who is currently running the show (not who you’d expect) and explains where we are headed. Anyone who is affected by the present financial crisis here or abroad needs to know the truth and be able to plan for the future, to avoid personal catastrophe. This updated edition not only shines the light of truth on who was behind the US financial crisis, but what is now happening in Europe. Is Asia next? Are they done with the US or coming back around? 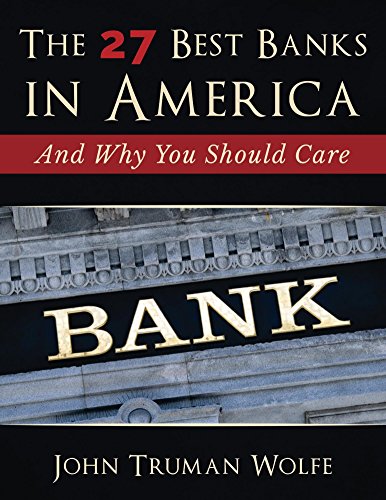 Few have heard of the semi-secret bank headquartered in the 16-story glass and steel tower that soars into the ice blue sky above Basel, Switzerland. But the Bank for International Settlements (BIS), a former financial facilitator for Hitler’s Third Reich, stands today as the most powerful bank in the world. The bank for International Settlements is the central banker’s central bank and as such sets the agenda and dictates to the 60 major central banks of the world - this includes the U.S. Federal Reserve Bank, the People’s Bank of China, the European Central Bank, the National Bank of Russia and the 56 other central banks on the planet. Exposing the BIS and its current “Bail in” agenda, which enables failing banks to confiscate their depositor’s money and convert it to bank stock, has served as the basis for recent books by former banker and Hollywood money manager to the stars, John Truman Wolfe. Documenting the fact that the U.S. banking Goliaths, B of A, Citibank, JP Morgan Chase, Wells Fargo, Goldman Sachs, are contaminated with hundreds of trillions of dollars of derivatives - what Wolfe refers to as “fiscal anthrax” - he felt it important to provide readers with choices and information about alternative banks in which they could place their money – banks that are safer, more secure and better managed. 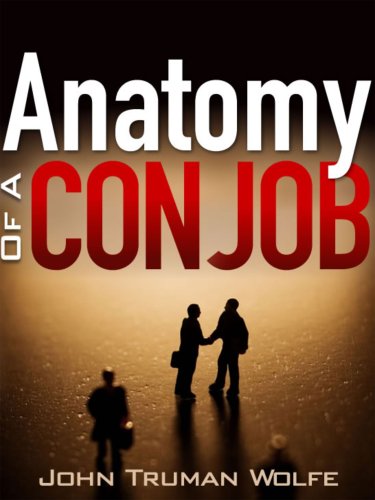 The Global Warming agenda has run into considerable controversy in the last year or so. Nevertheless, it remains nothing less than the most ambitious PR campaign in human history: governments, media, universities, think tanks, all singing the same man-made global warming song. A song with deep feeling, but terribly twisted science. The question is, Why? There are real, and urgent environmental problems on this planet. But the environment movement has been hijacked by a cabal of international bankers. A short history of this coup and who is behind it, is the subject of ANATOMY OF A CON JOB. 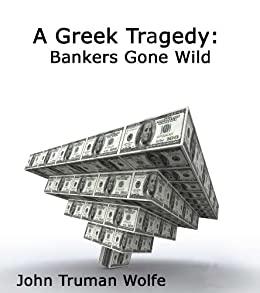 A Greek Tragedy: Pulling Back the Curtain on Bankers Gone Wild Kindle Edition

It is a harsh metaphor, but the Glory that was Greece is gone. That was then and this is now, and the country has become a broken pawn in a real life drama that is being played on the stage of international finance. Some of the cast know it is a play. Most do not. The audience – legislators, regulators, finance ministers, and nations large and small – think it is real. Which it is. They just don’t know that it is an orchestrated reality. Here’s the story. Note: At around 4500 words this is a short but complete coverage of what is happening in the PIGS 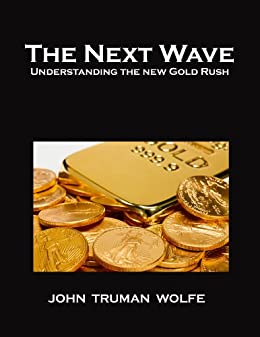 The Next Wave: Understanding the NEW Gold Rush Kindle Edition

The first wave of the great precious metals bull market of the twenty-first century took gold from $252 an ounce to a stunning $1862 and silver from $3.56 to $48.58. With more than a 700% increase in gold and an eye-watering 1300% increase in silver followed by step shakeouts in both, many thought the precious metals bull was dead. With the yellow metal having built a base in the $1700s and silver in the high $20s to low $30s for the last year , John Truman Wolfe presents the compelling case for the Second Wave of the great precious metals bull market. Using both historical data and the present day machinations of "Benny and the Feds," the case for a new chart busting advance in gold and silver is not only persuasive, but from Wolfe's perspective down right undeniable. 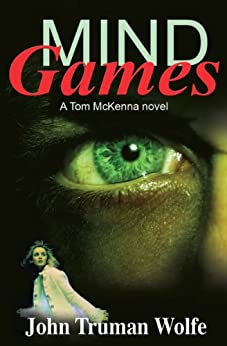 Inspired by true events, Mind Games is set against the background of one of the most daring, secret CIA programs of all time. Tom McKenna is approached by a successful but very disturbed CEO of a Silicon Valley biotech firm, who knows she is being stalked but cannot see the stalker. Despite a contentious and sometimes volatile relation with his client, McKenna must find the stalker before the woman Stryker loses her sanity, her business and one of the most profound genetic breakthroughs of the century. Tom McKenna is a private investigator with a biting wit and a romantic flair in the tradition of Robert B. Parker’s Spencer, Robert Crais’ Elvis Cole or Harlen Coben’s Myron Bolitar. But McKenna’s cases tend to fall outside of the customary murder mysteries and often cross paths with the dark side of government intelligence. 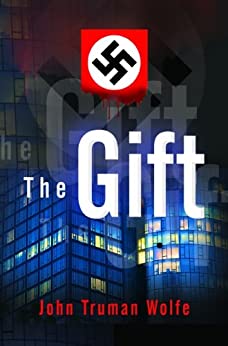 The valet at Beverly Hills National Bank is a saucy red head dressed in hot pants, a tux jacket and high heels. No surprise given the bank’s celebrity clientele and super-sized account balances. When the deposit base starts to shrink and earnings fall after playboy CEO, Jim Robbins refuses to sell the bank to an undisclosed investor group, he chalks it up to a recent earthquake in the Valley. But when break-ins ensue, which baffle the police, Robbins enlists the services of Tom McKenna, a Berkeley based private eye who happens to be in Los Angeles seeing his lady love, Karen Sanchez. Sanchez, the owner of a music industry PR firm, is both a customer of the bank and a friend of Robbins.